Me, myself and a random nomination 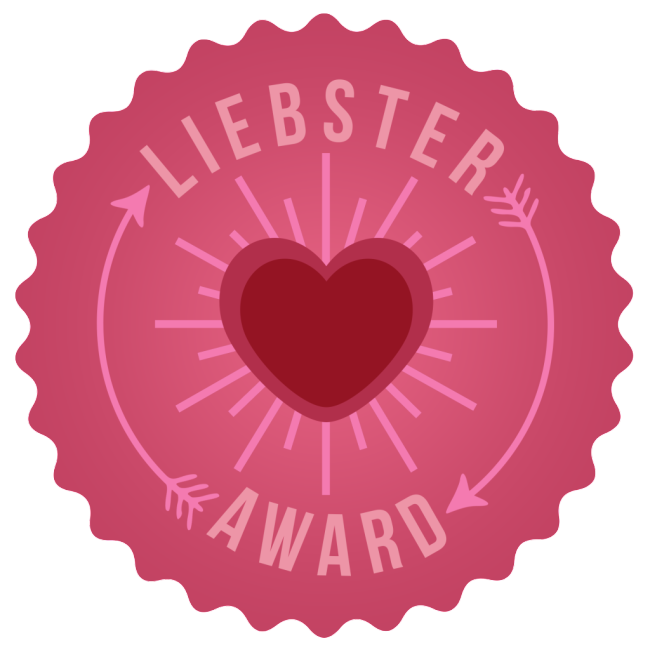 I was nominated forThe Liebster Award by my best mate Cazz who blogs at http://thecazzbar.blogspot.co.uk/  I have known her for some 5 years and met her on twitter.  The nomination works on various sets of rules but these are the ones we seem to be following:


1. Post the award on your blog.
2. Thank the blogger who presented this award and link back to their blog.
3. Write 11 random facts about yourself.
4. Nominate 11 bloggers who you feel deserve this award and who have less than 200 followers.
5. Answer 11 questions posted by the presenter and ask your nominees 11 questions.

So here we go.  Thanks to Cazz for the nomination and here are the 11 random facts:

Now for the questions


Question 1   what's the weather like where you are RIGHT now? Come on, up off your chair and go look...   At the moment dry and dark, but by goodness the rain has been torrential today

Question 2   where is your favourite place to go on holiday? - Greece, mainland Greece an area called the Pelopenese and a town called Tolon

Question 3  How many rooms in your home? 5 plus landing and stairs

Question 4  what's your favourite colour? - PURPLE - but you all knew that

Question 5  what was your last blog post about and why did you write it? - last blogpost was about a Design Team Tag, I wrote it so there was something to show those wanting to play along and so they knew what I'd done.

Question 6  You can have 4 guests for dinner (alive or dead) - who would you choose and why? - Peter Ustinov for his anecdotes and witty reparte, Audrey Hepburn for the glamour and because she's my Shero! I love her films and the work she did for Unicef, Stephen Fry, again for the tales and to raise the tone of the evening and finally Kylie Minogue, she just seems to be so genuine and after the battle with Breast Cancer and overcoming it to come back better than ever, that and she's an inch shorter than me so I won't be the shortest person in the room

Question 7  what was the last song you listened to? - Radio GaGa by Queen, I have the radio on in the car all the time, but couldn't tell you what was on as I pulled up at the house, the Queen track was on at lunch time and being my favourite band, the rasio went right up and I sang along like a loon

Question 8  favourite film of all time - Breakfast at Tiffany's

Question 11  (and the last one, you'll be happy to know)  what is YOUR best feature / attribute? - I have no idea, before I put the weight on I would have said my size it hadn't changed since I was a teen, now I wouldn't know.  I'm guessing those of you that know me will have your own thoughts on that.

I won't be nominating onwards, but I look forward to reading your comments/responses to what I have written.

This time Silvia was at the helm for choosing the theme and I'll be honest, I struggled with the Z part, so I spent an hour rummaging through about 4 million sheets of paper (I kid you not) to find one with a Zig Zag pattern on which I backed my tag with, but it was a tad on the bright side, so I used a combination of Distress Inks to tone it down quite a bit, and a combination of stencils to add more layers to the background.  I stamped the face Using Indigo Blu stamps and Versafine Onyx Black and used Distress Inks again to fade into the face leaving that part white. 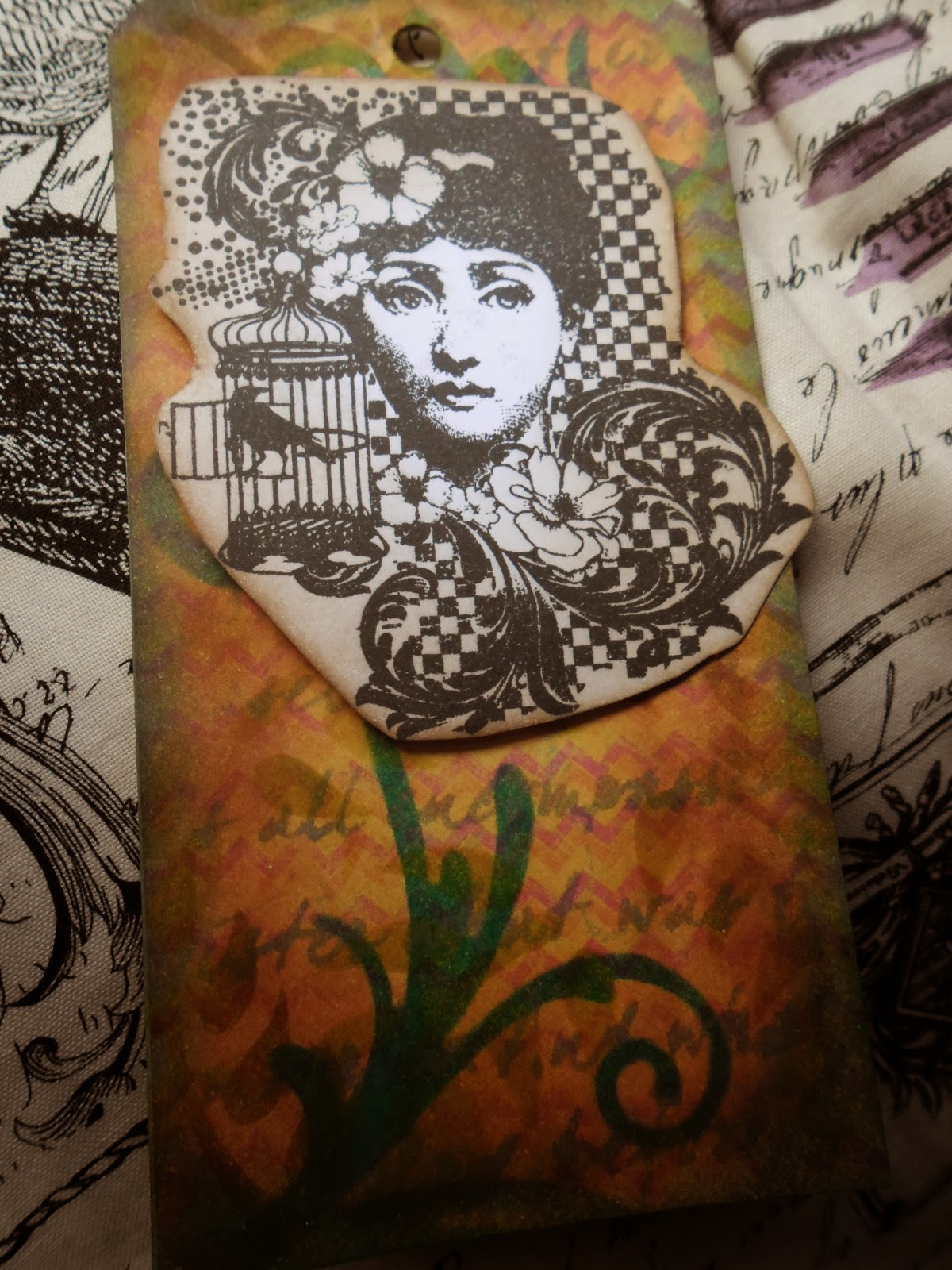 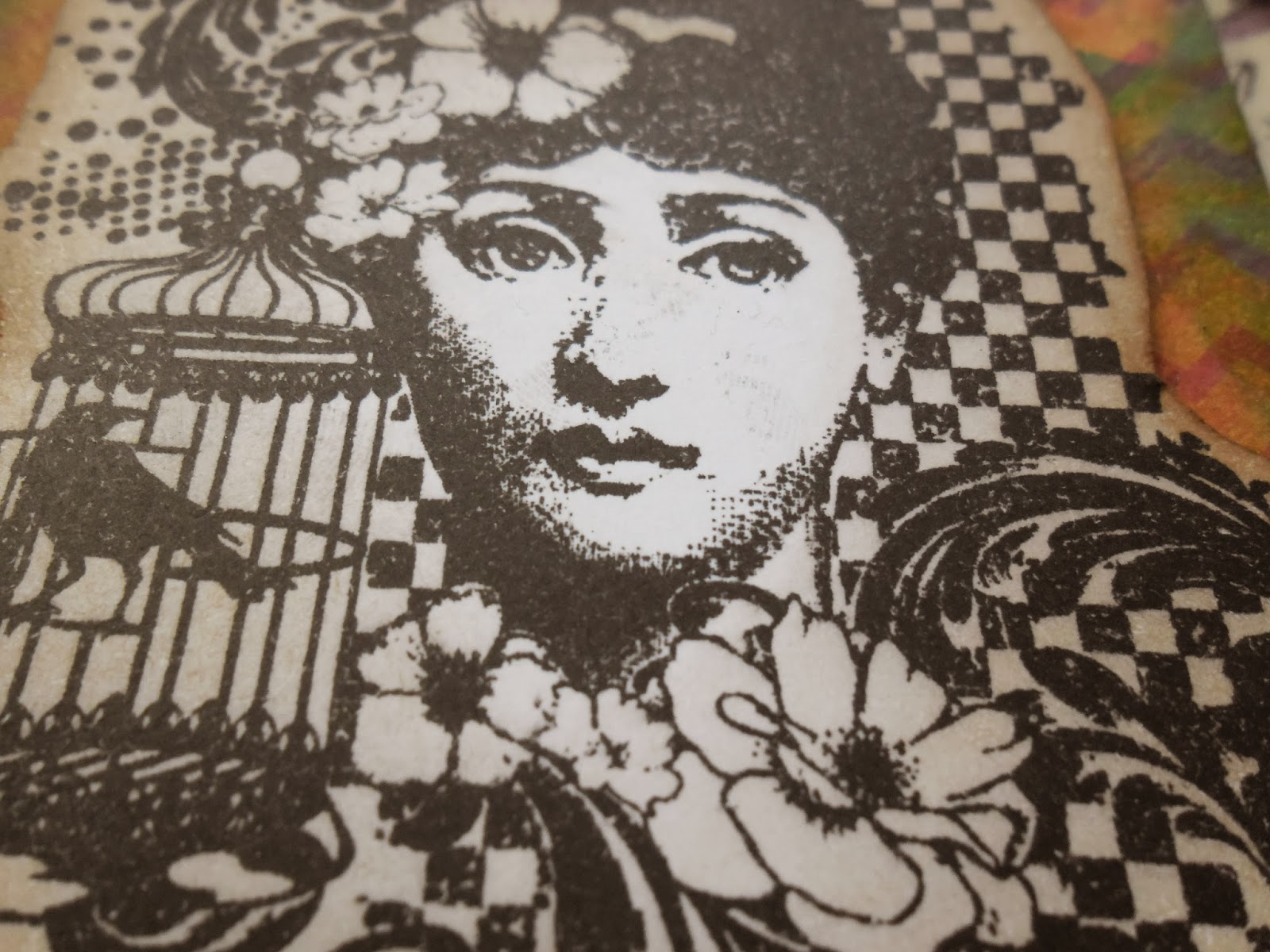 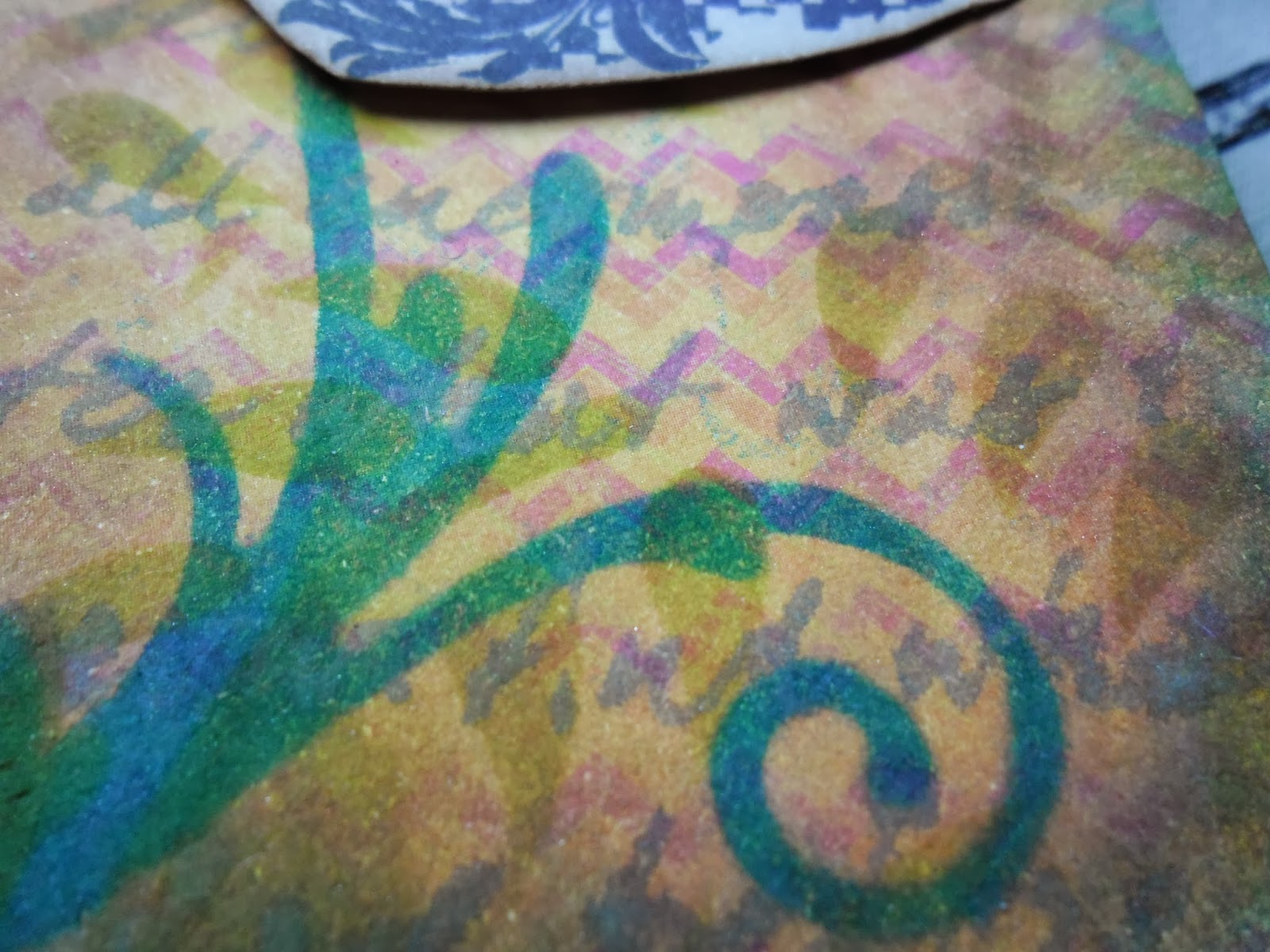 Well this time it was my long term twitter buddy's turn to choose the theme and she went with C and metal.  I started by making a tag blank from white smooth card and covering it in a random blend of Butterscotch, Terracotta and Pebble alcohol Inks, I then cut Spellbinders Sprightly Sprockets in Tim Holtz self adhesive foil and cut the Corner Flourishes, and Cogs Edger from Tim's Sizzix Range in his self adhesive metal card and used the same alcohol inks to rust these up.  I stamped the clock face from and word the Timeless set which combines G45 with Sizzix dies I aged these down with a touch of Vintage Photo Distress ink and added in the clockhands from Papermania Chronology range with a brad. 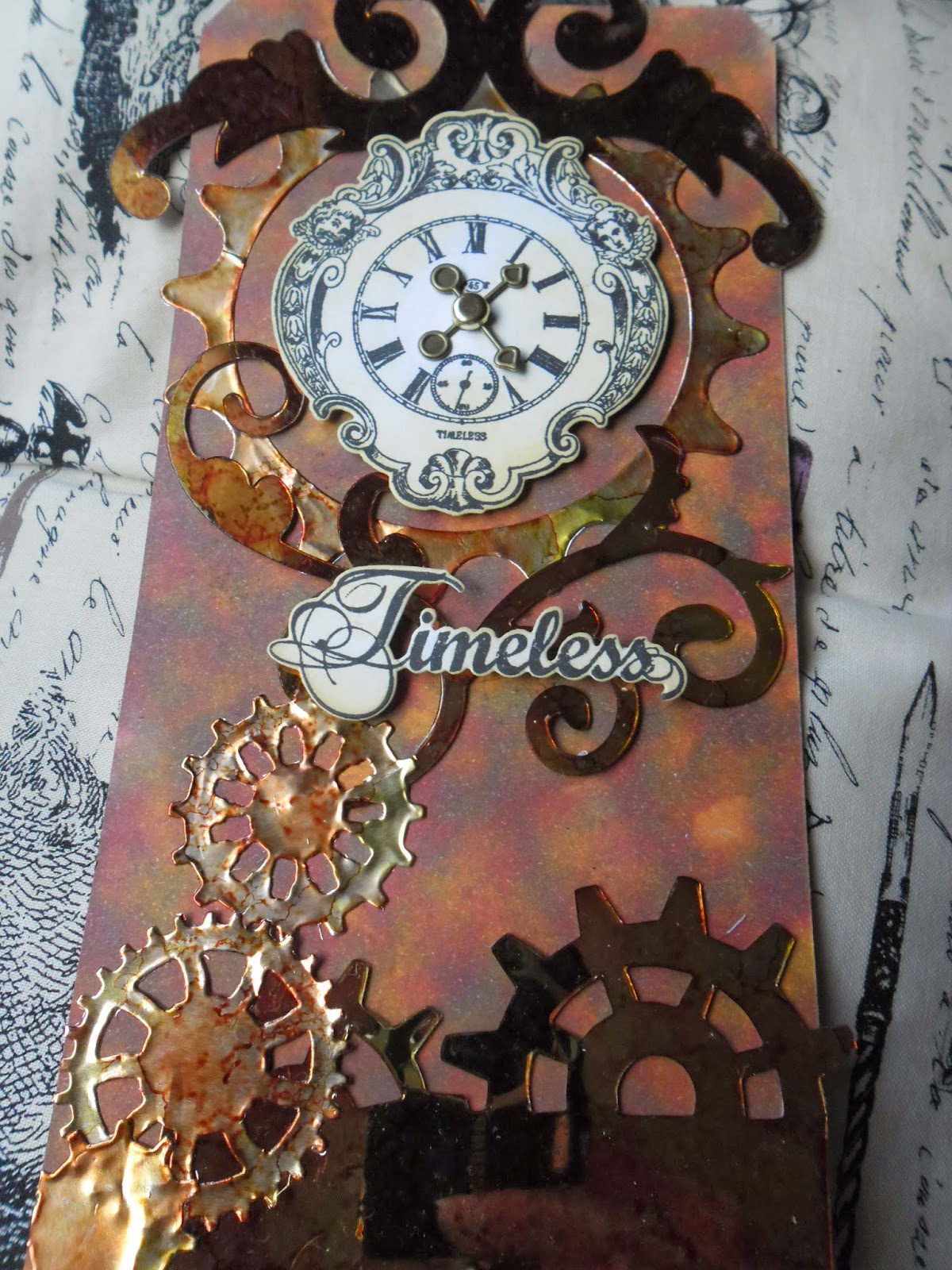 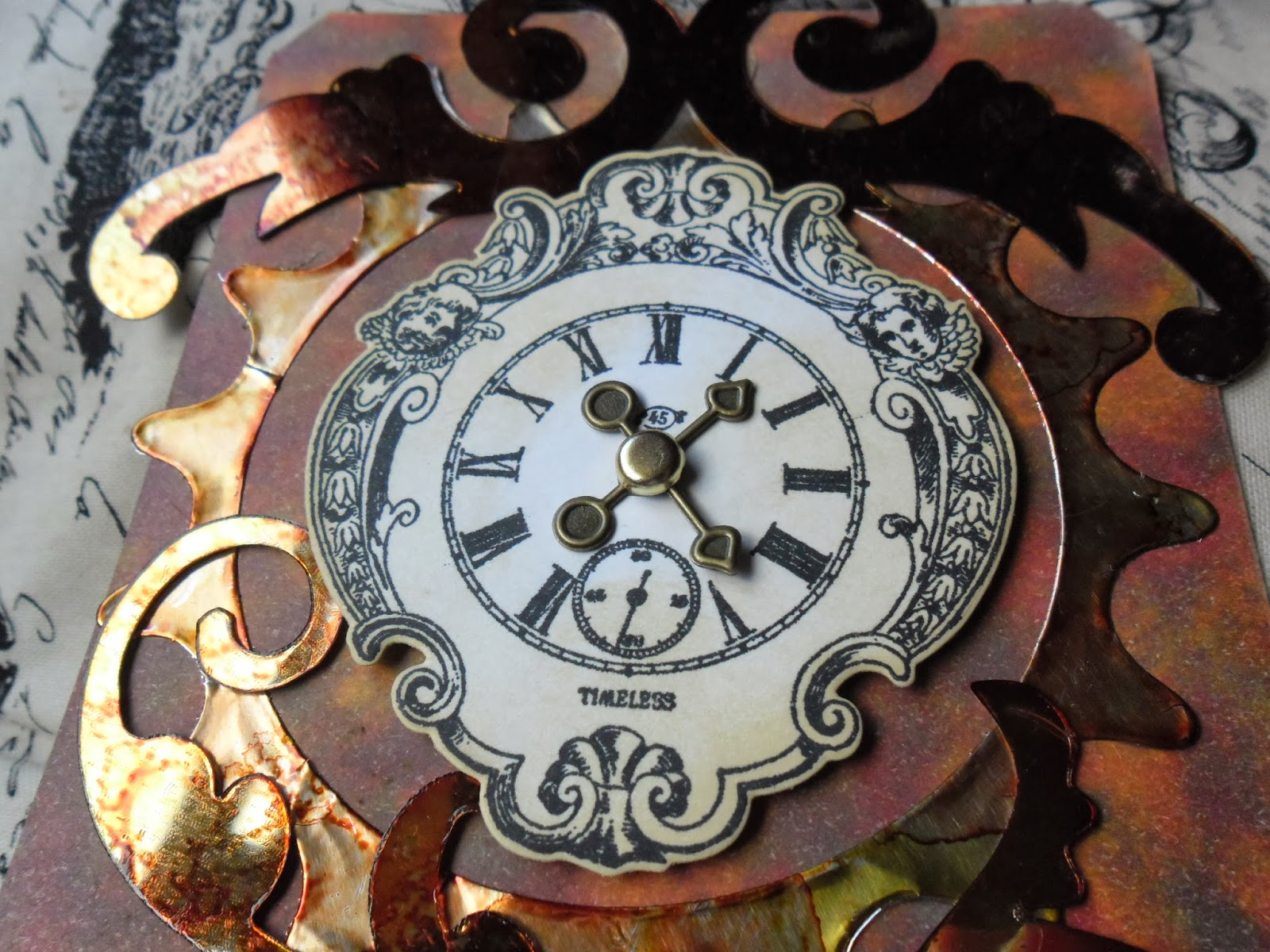 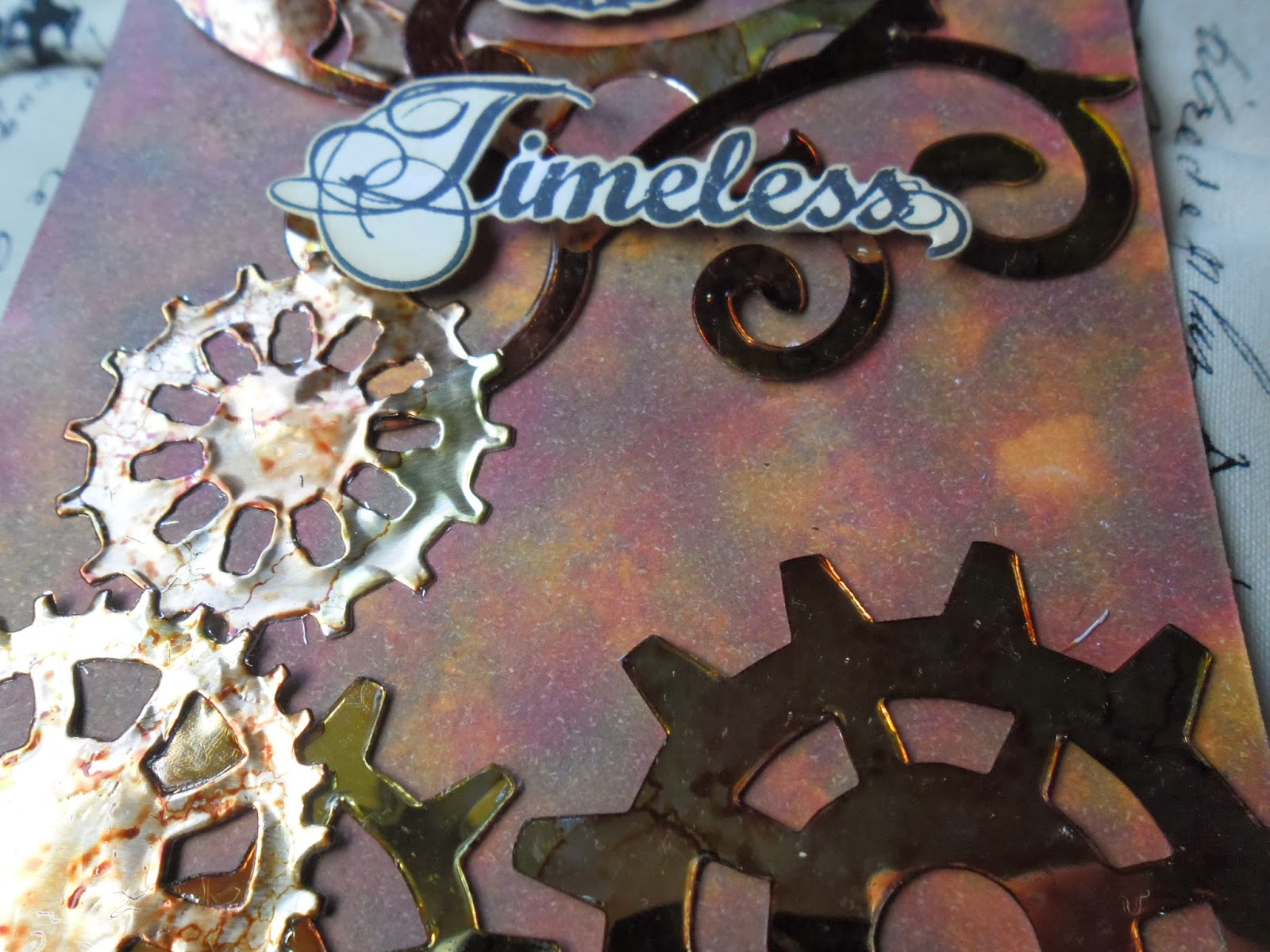 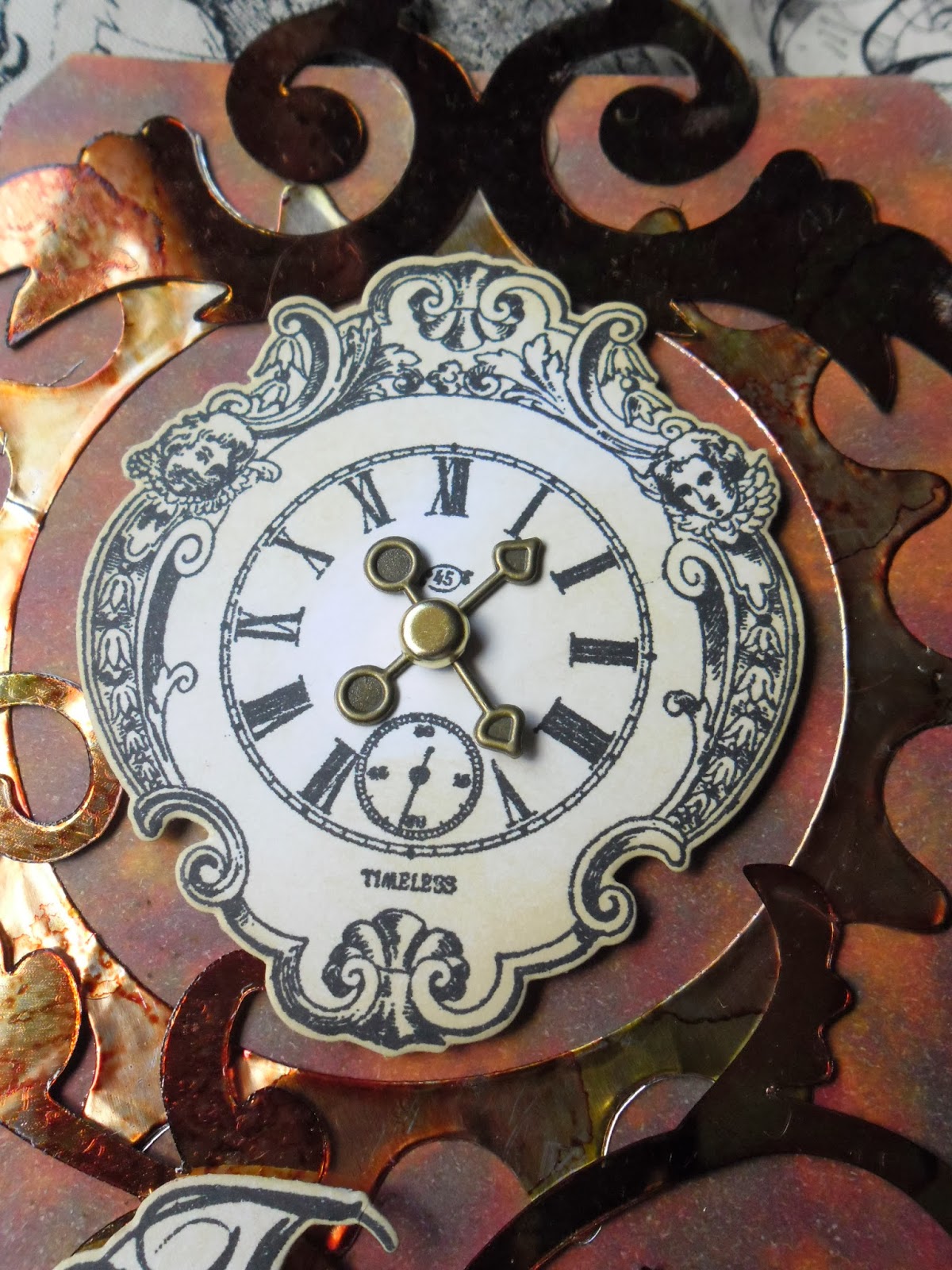 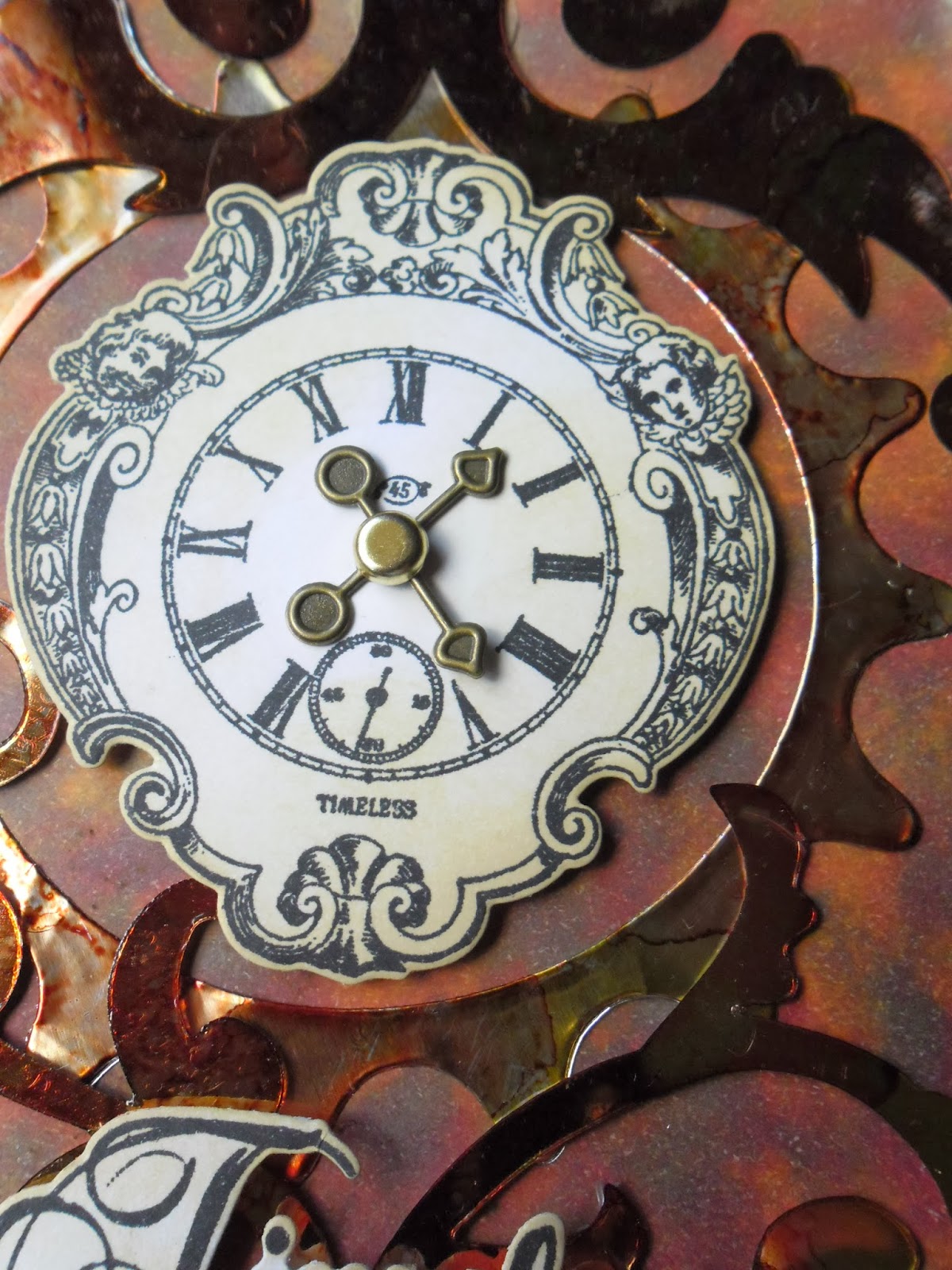 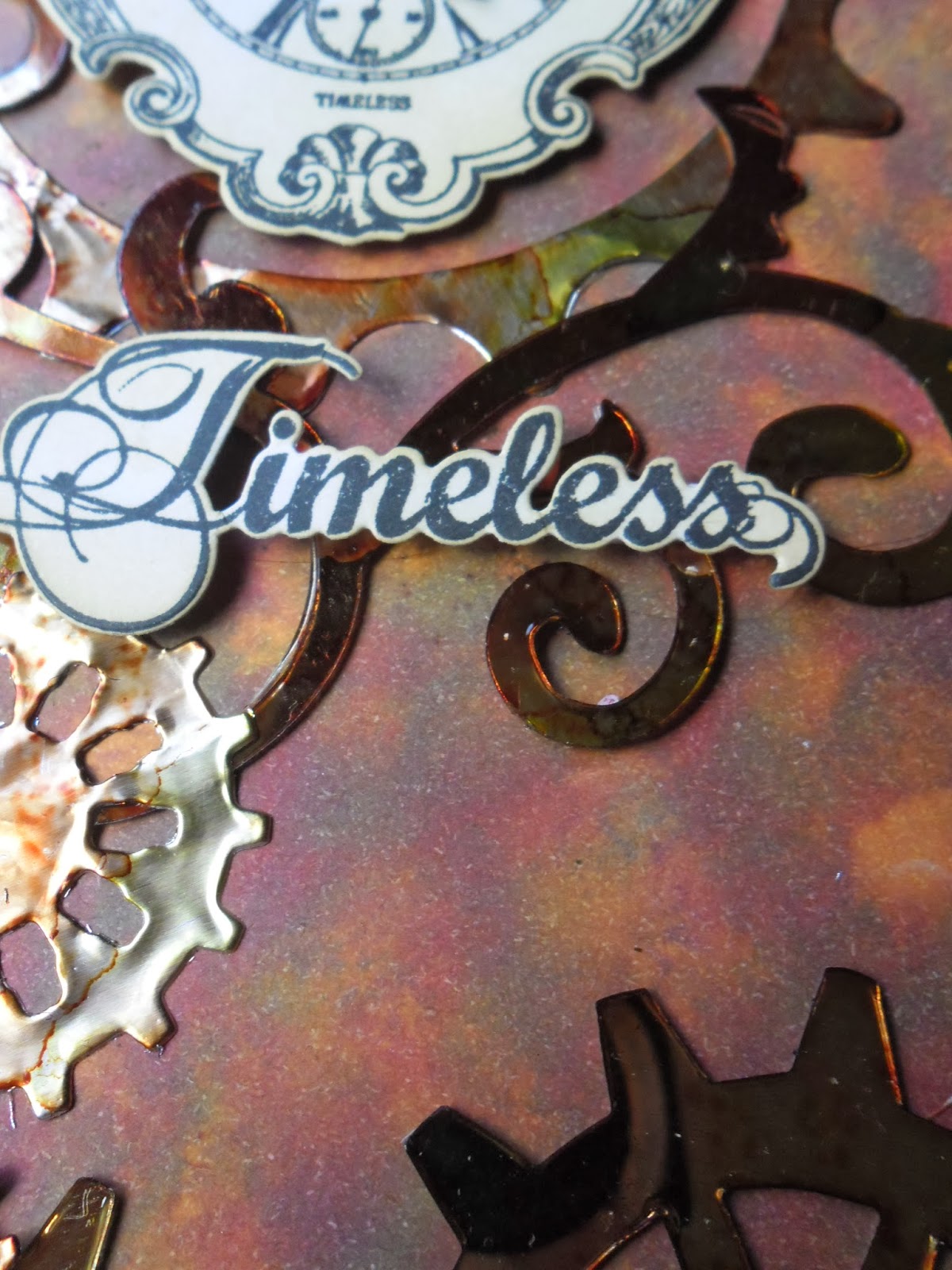 I would like to enter this fir the following challenges:

Well you will have all seen it on PaperArtsy's Blog by now, and you'll have read what I wrote there, as there is not much to add other than thank you to Leandra for this opportunity.

Here are the pics 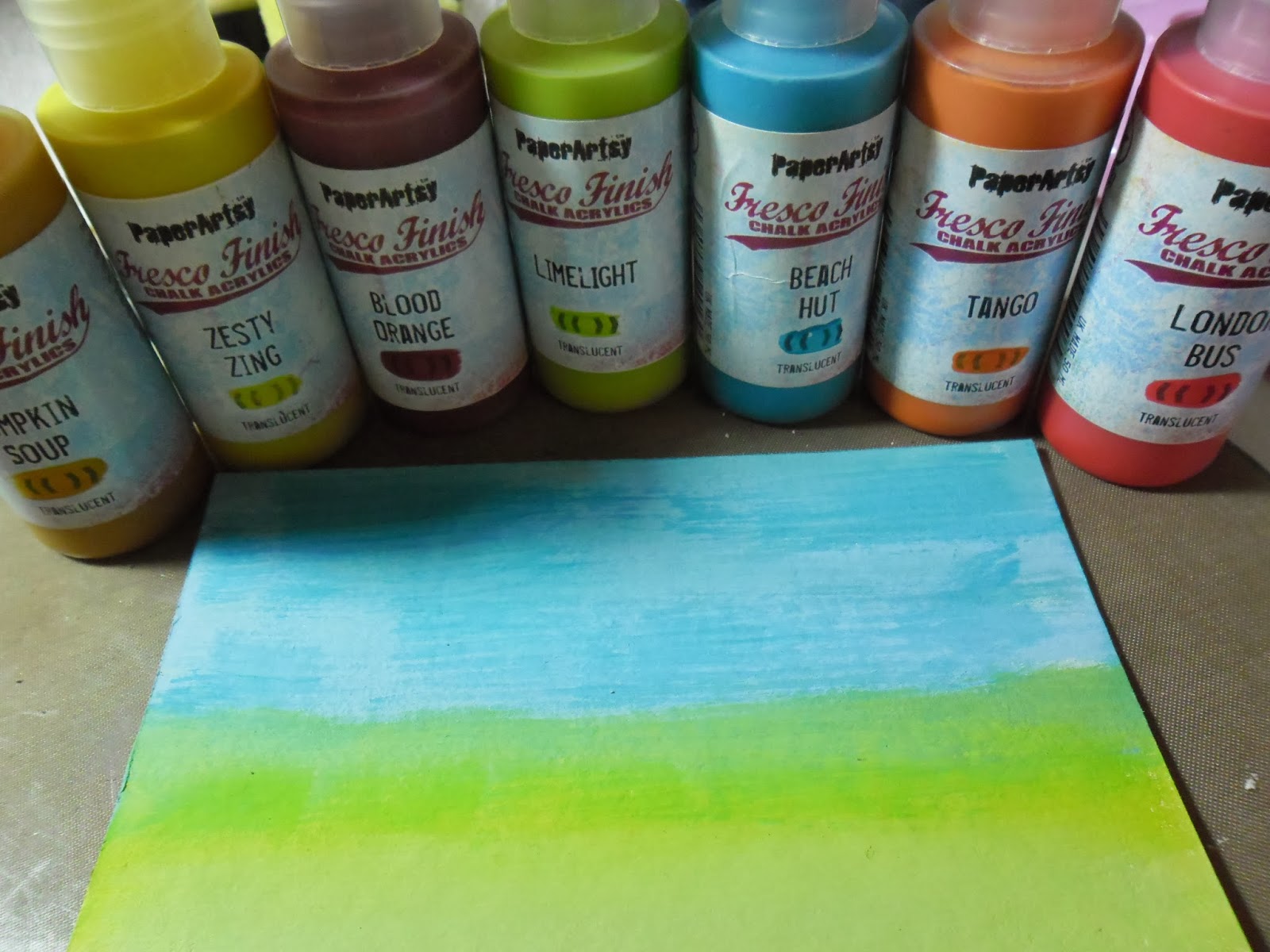 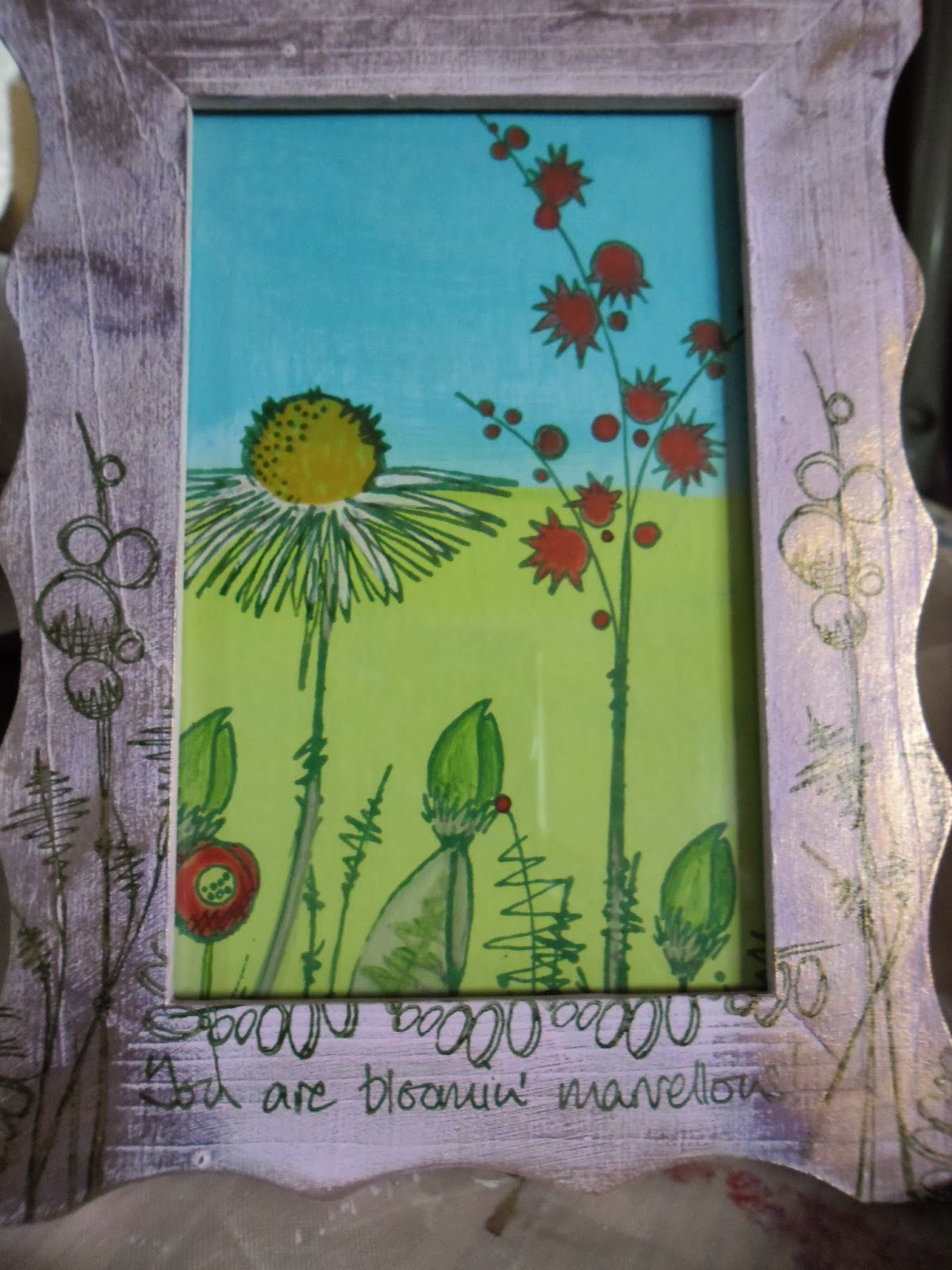 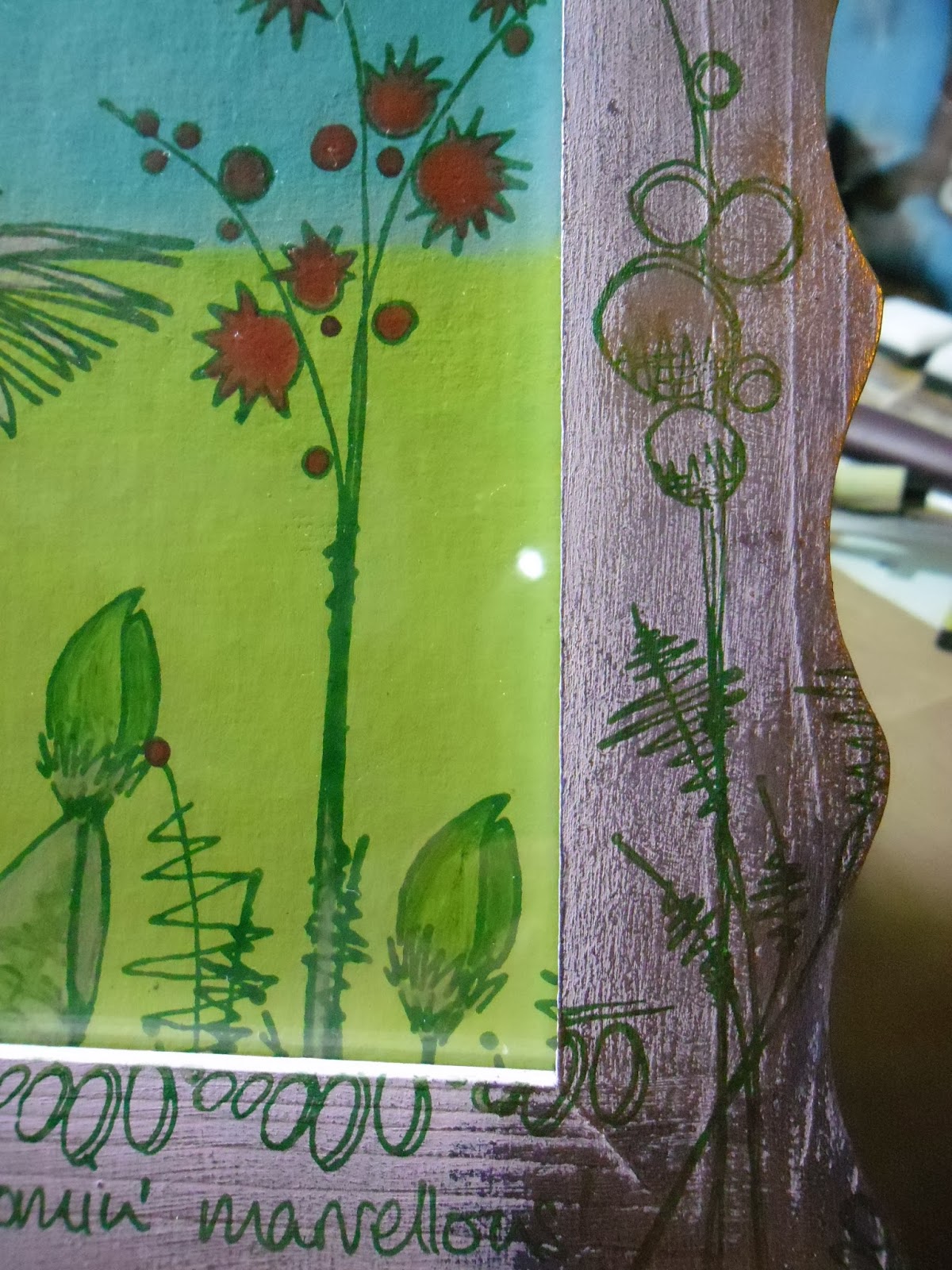 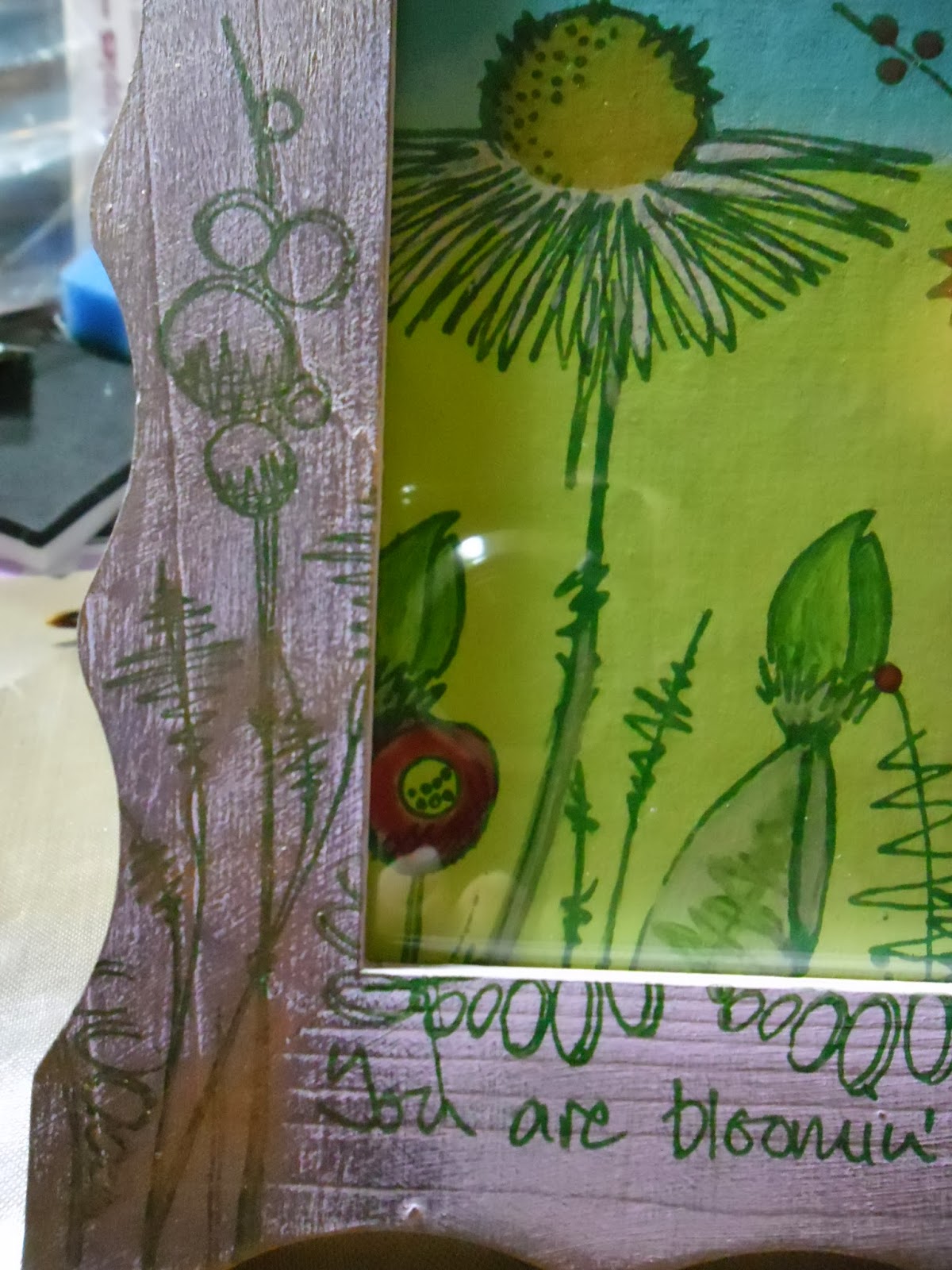 For this project, I will admit now that I used nothing at all on the list that Jo Myhill used on PaperArtsy blog on Thursday, mainly because I own not a single thing on the list (there may be one or two Fresco Finish paints that are the same, but that's all)

I got a 12X12 paper, no idea who's it is as I've had it so long, I then cut it down to 8X8 and I stencilled the Trpoical leaf design from imagination Crafts in Pumpkin Soup, I then watered down some Beach Hut and painted the main square and, the Scraps off the sides as these would make the flahhrs later.  I then coated a tag in Bora Bora, overwashed it with watered down Beach Hut, Pumpkin Soup and Limelight then stencilled the tropical leaf again in Pumpkin Soup.

I then set about cutting out the flowers and the leaves. For these I used Bitty Blossoms and Foliage Spellbinders and a Marianne die that is swirly roses.  Decided these weren't big enough on their own so I stamped various hearts from EDY01 in Teal Blue Stazon and cut these out to build the flowers.  While these were drying I stamped the sentiment from Chocolate Baroque Words of Wisdom series.  I then constructed the whole thing and added a ribbon to the tag. 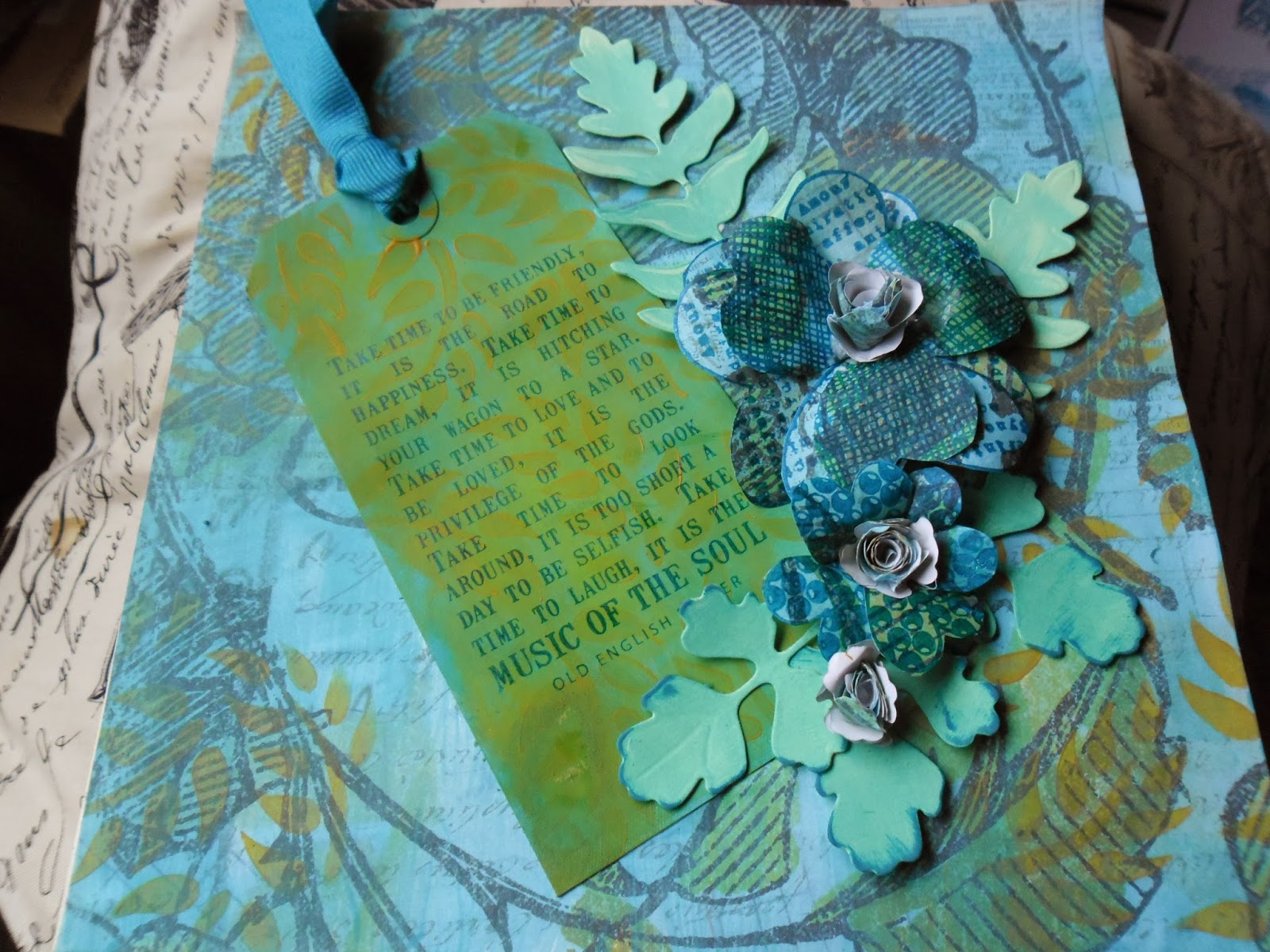 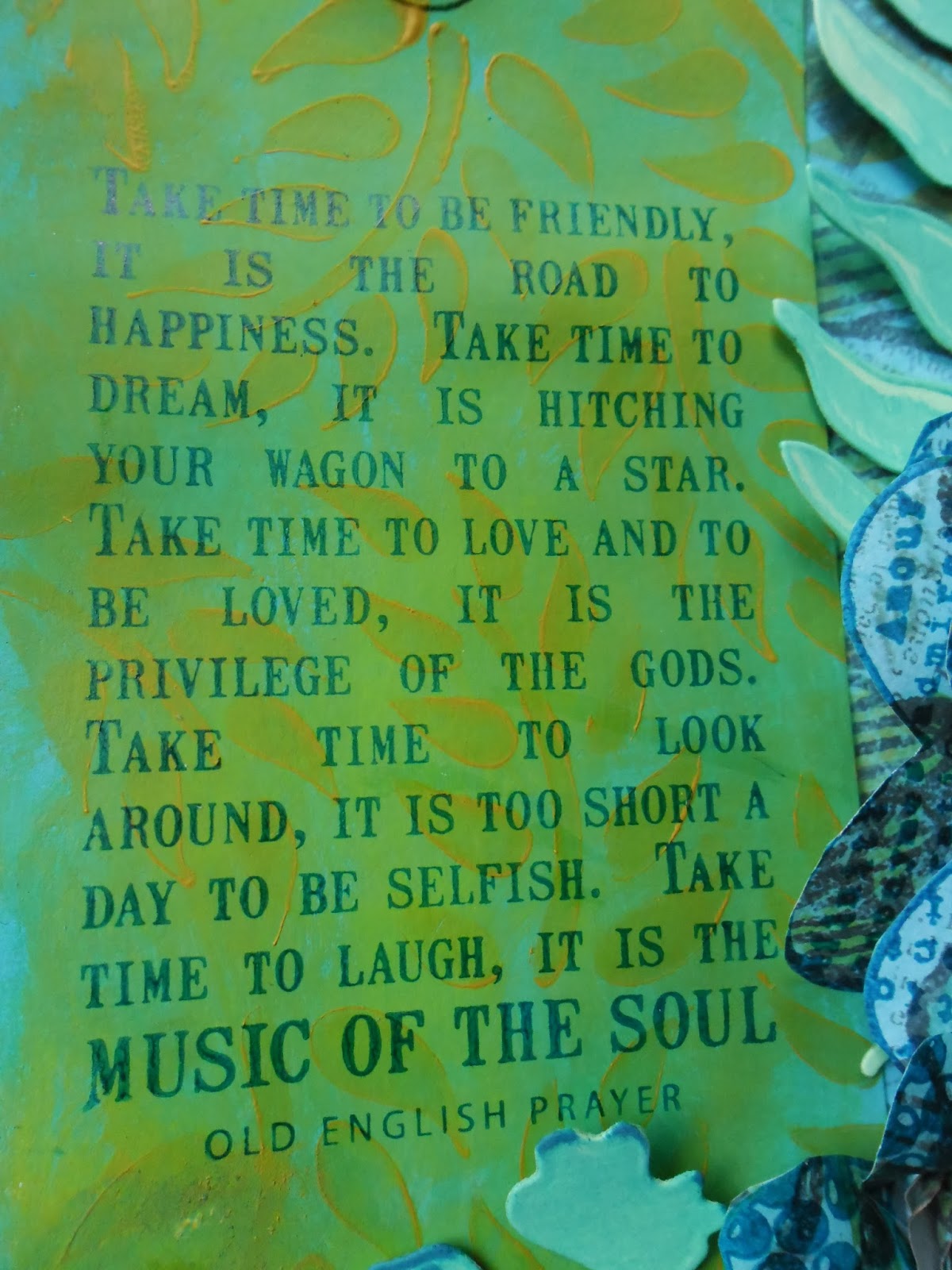 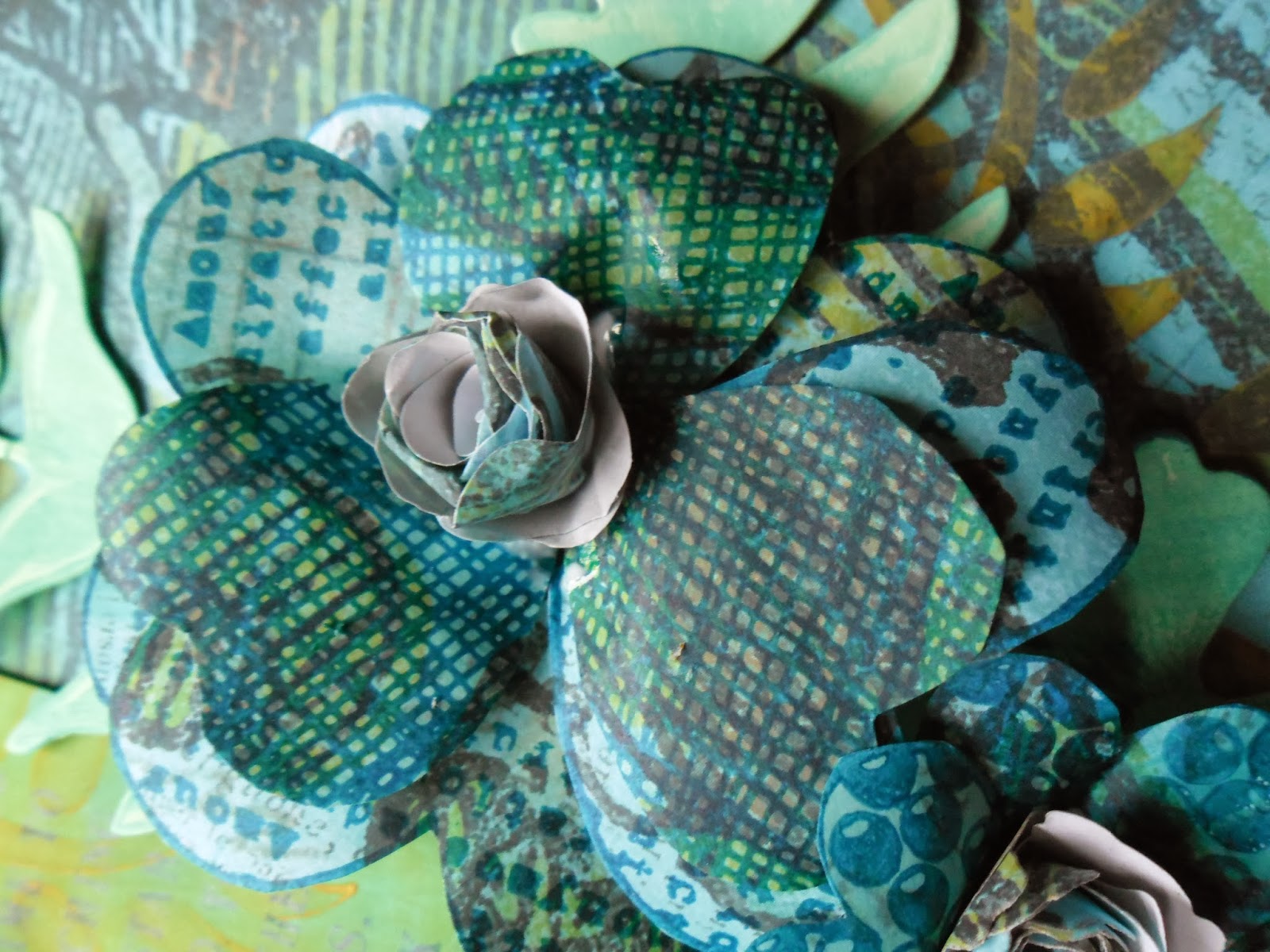 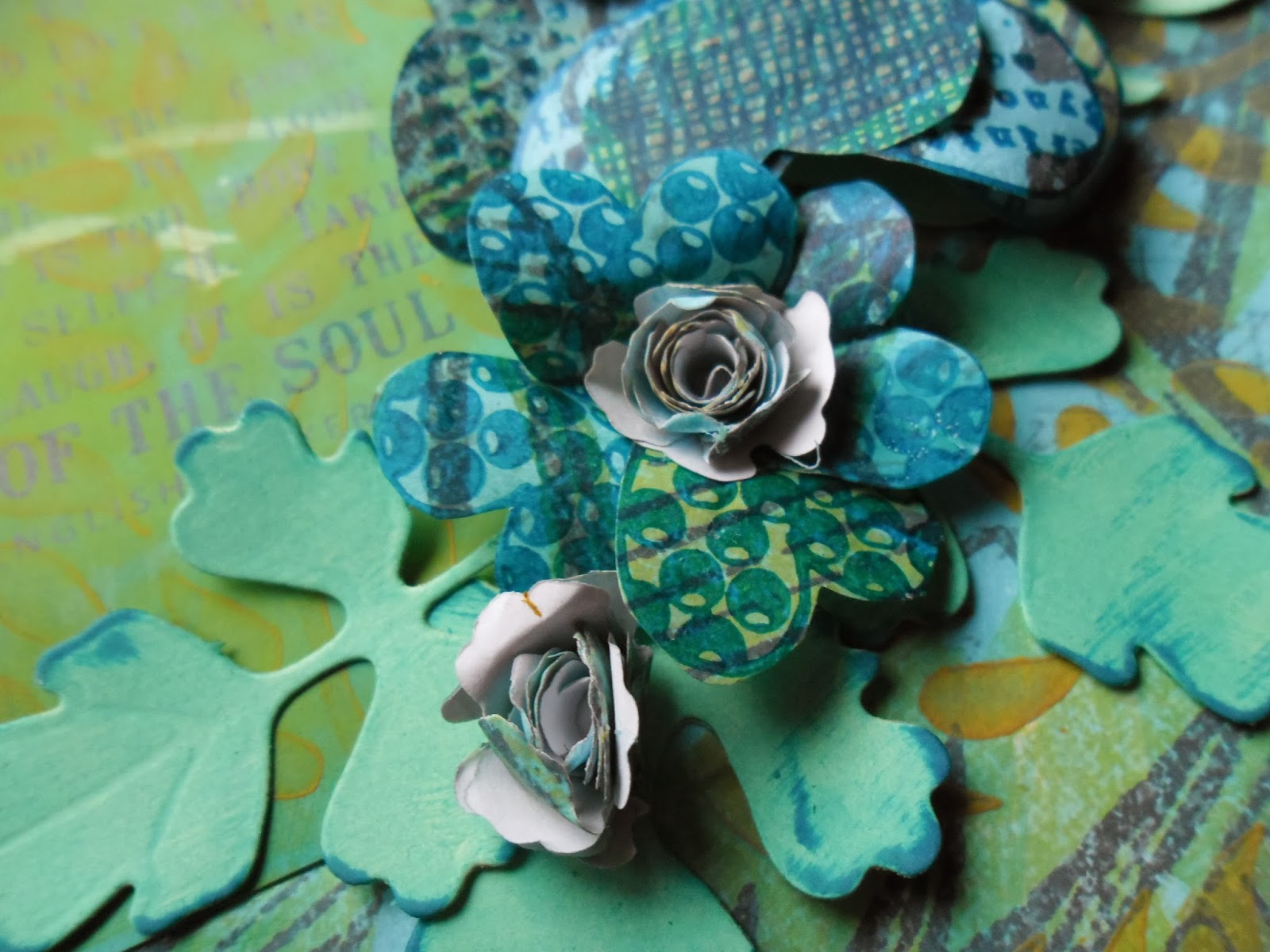 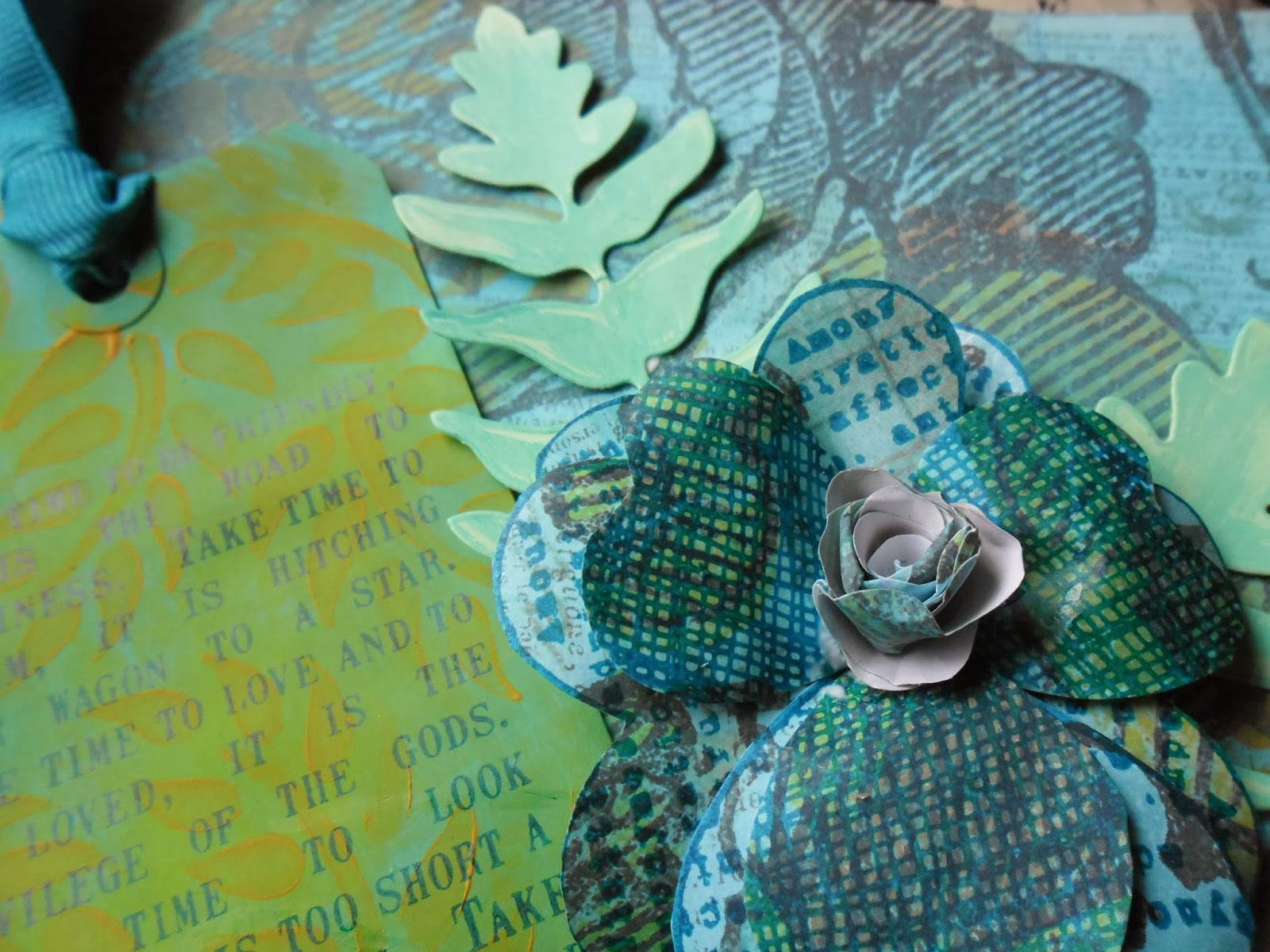 I am also entering this into

Aloha Friday #18 Monochrome
Come and Get It Challenges - Flowers Galore

For this card I simply went with Vintage Lace Collection From Hunky Dory and added to it by using my Grand Scalloped Oval Spellbinders and a Darice Embossing folder call Regal Flourish on a co-ordinating card colour. 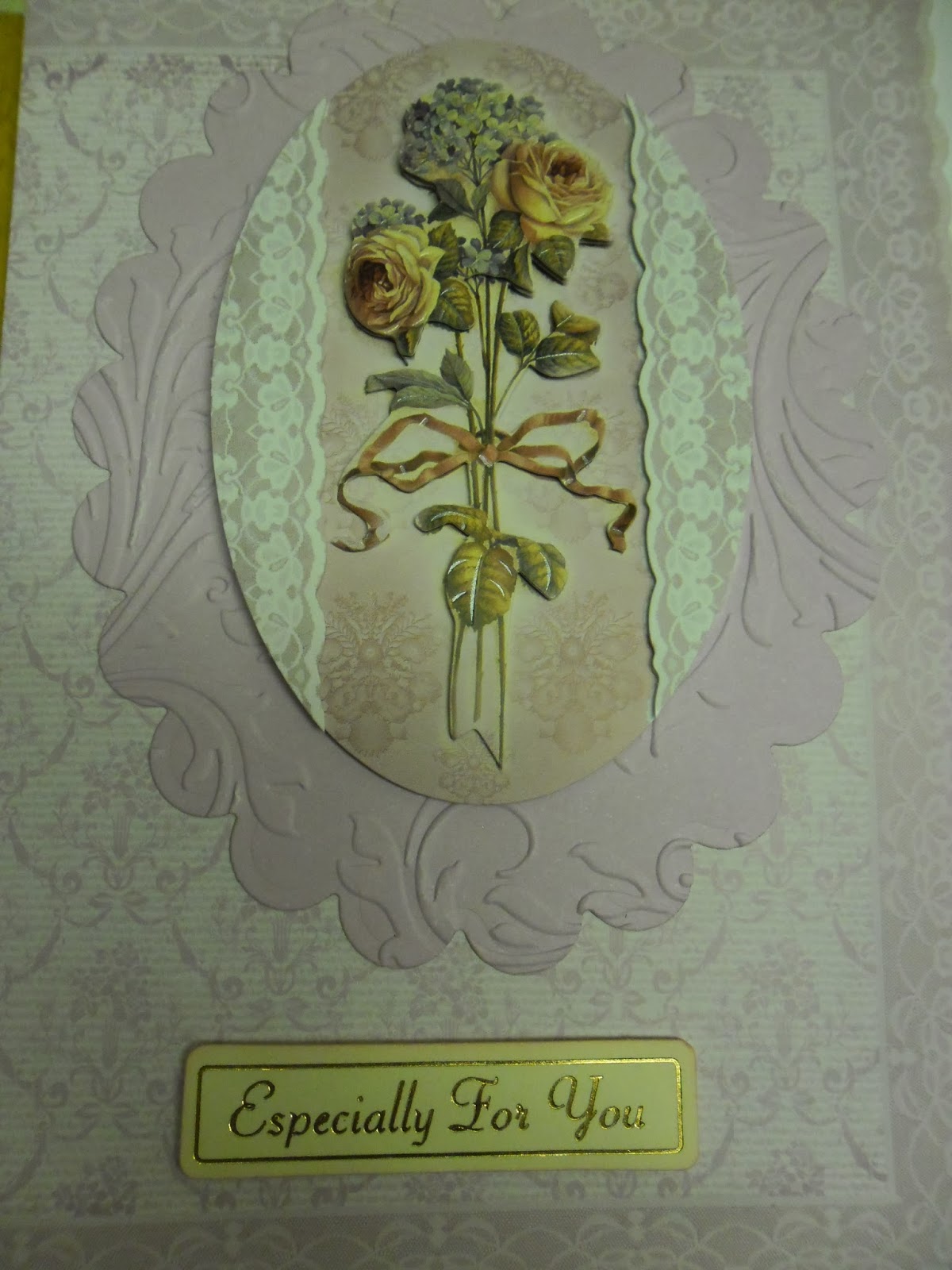 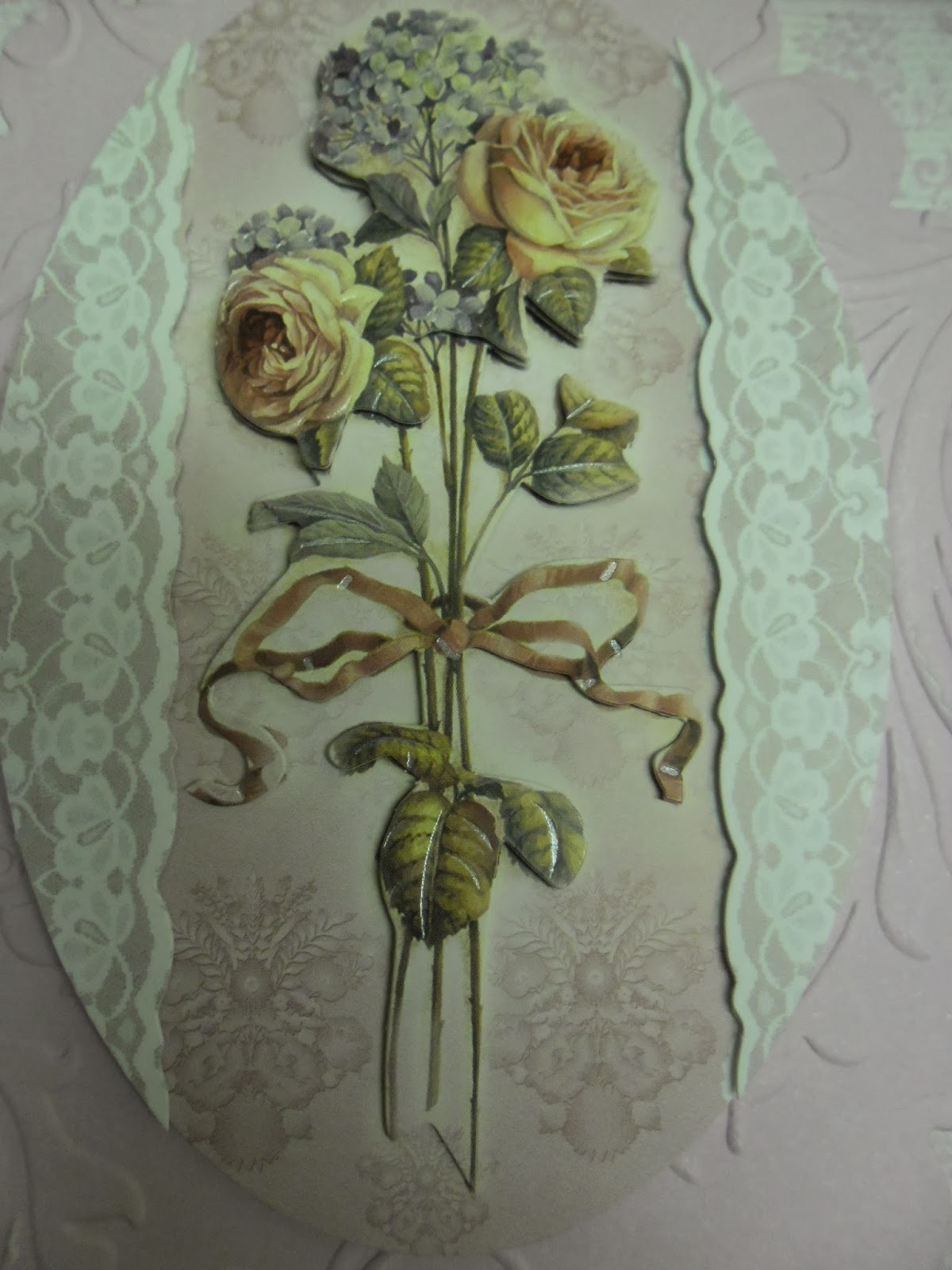 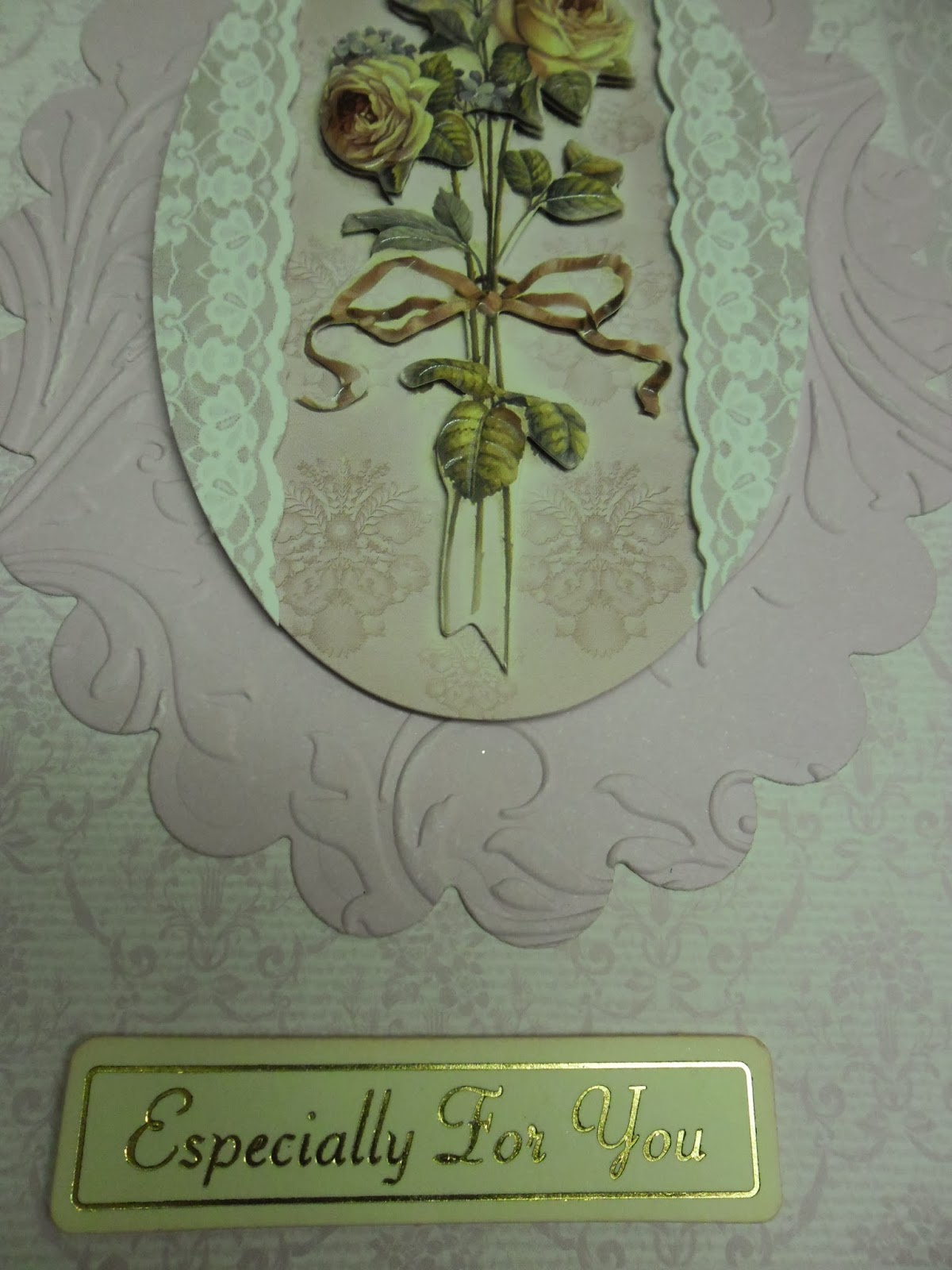 This canvas was inspired by Linda's on PaperArtsy Blog last night so this morning I got out the Grunge paste and the frame stencil and covered the whole thing.  I then went out for a little mooch around Crook and a lovely Brunch at Cafe J's (this bijou cafe is run by family friends and is highly recommended if you're ever in this neck of the woods).

Upon my return the stenciling was completely dry which allowed me to hit the paints.  I used a combination of Guacamole, Cheesecake, Haystack, Pumpkin Soup, Limelight and Chocolate Pudding Fresco Finish paints and the went over the stenciling with Renaissance Treasure Gold.  I then used Olive Archival to stamp the script background BG06.

The I stamped the medieval maid (Sheena Douglass stamp) onto water colour card and used my distress pens to colour her in. I then cut this out with an Oval die from XCut, and distressed the card so it wasn't bright white using Distress Inks. I then glued the picture into it's frame. 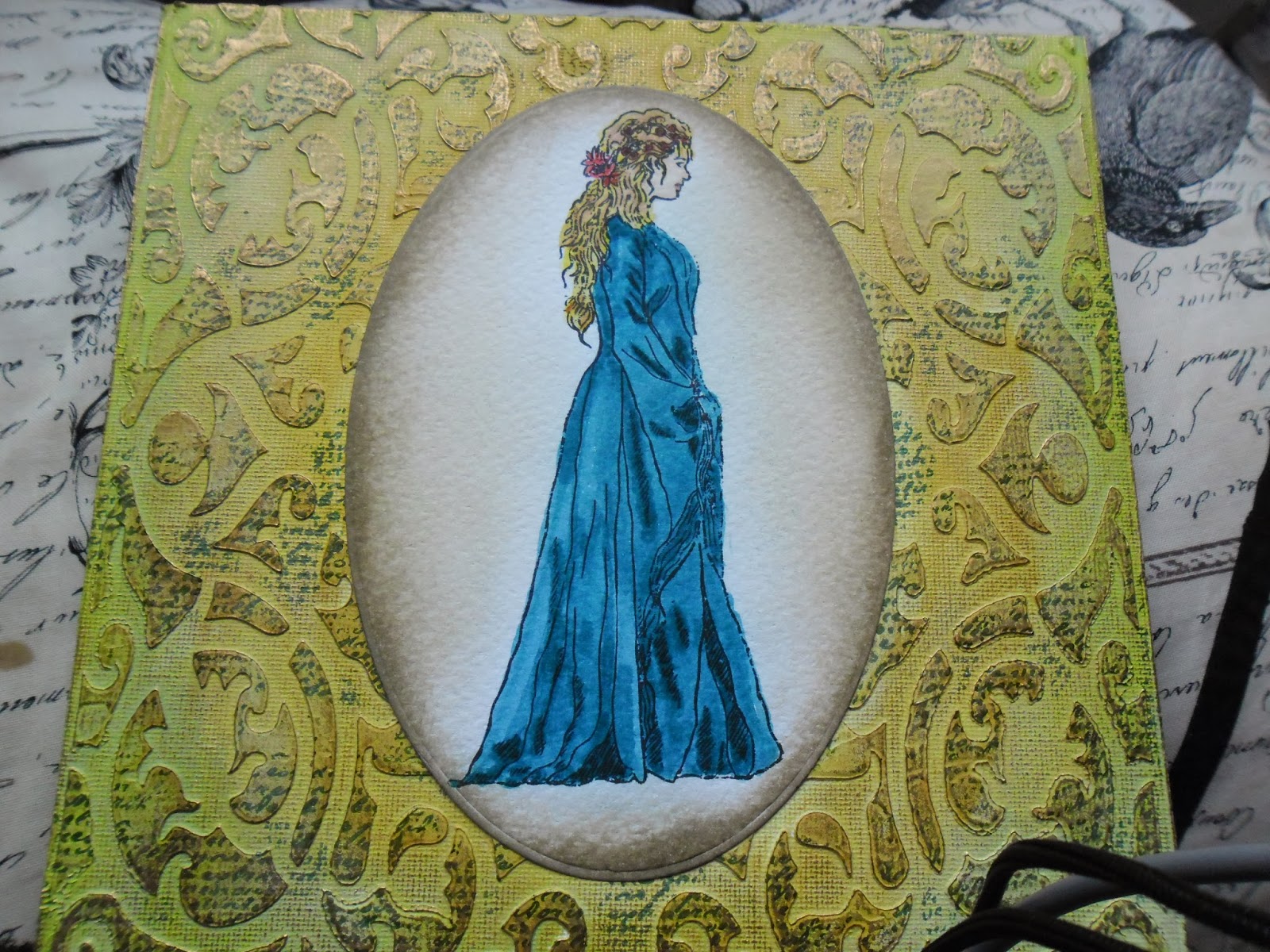 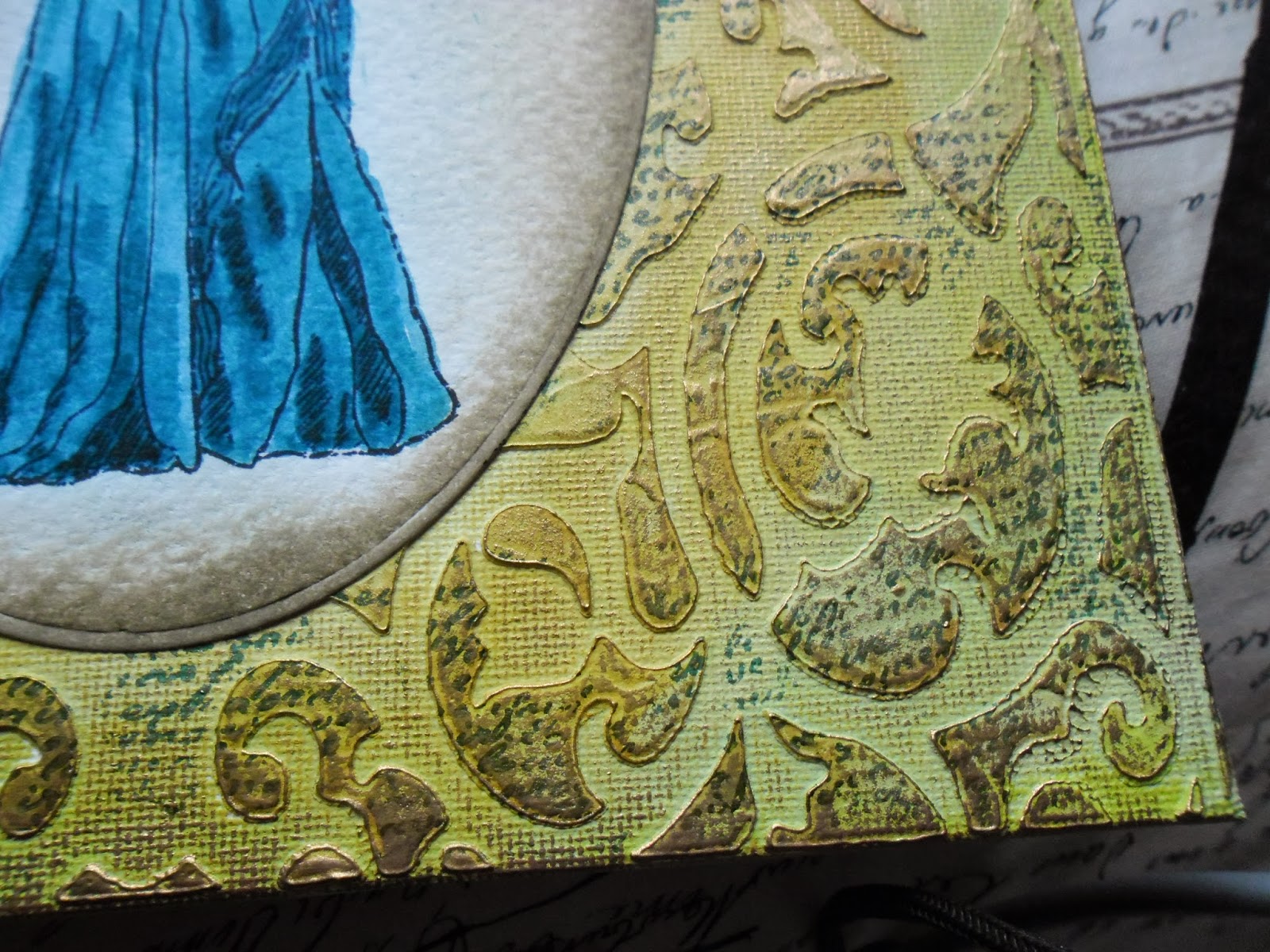 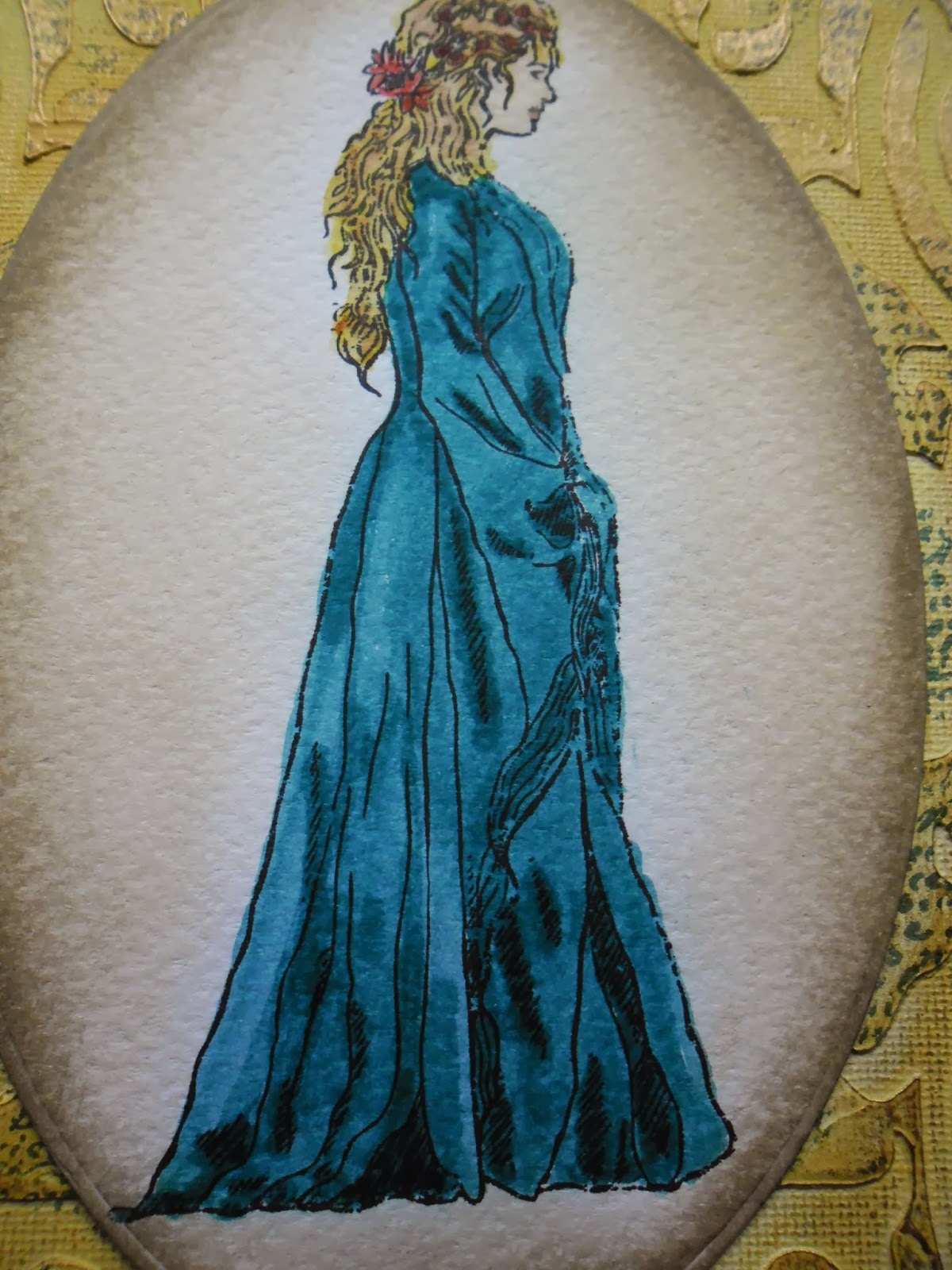 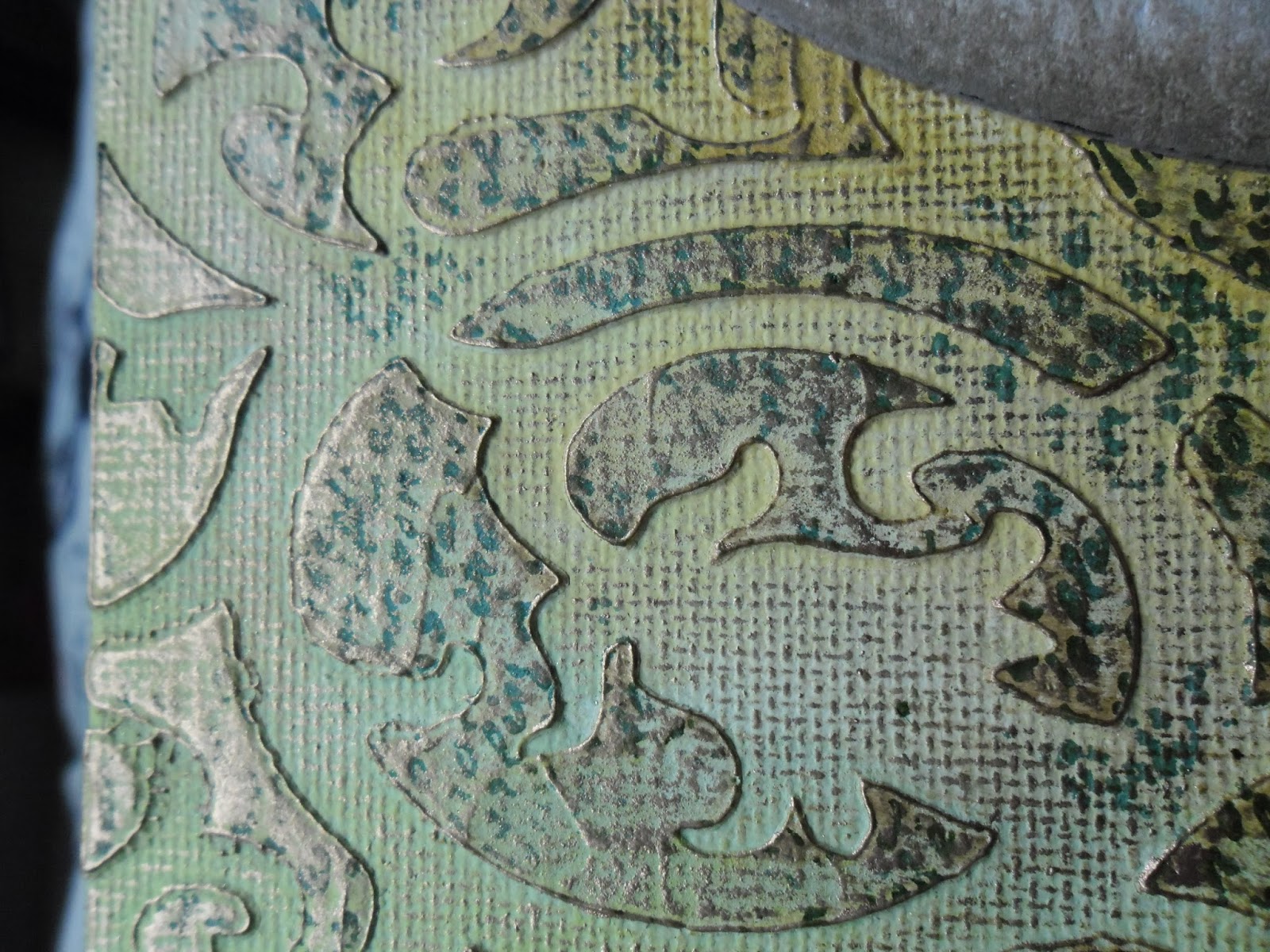 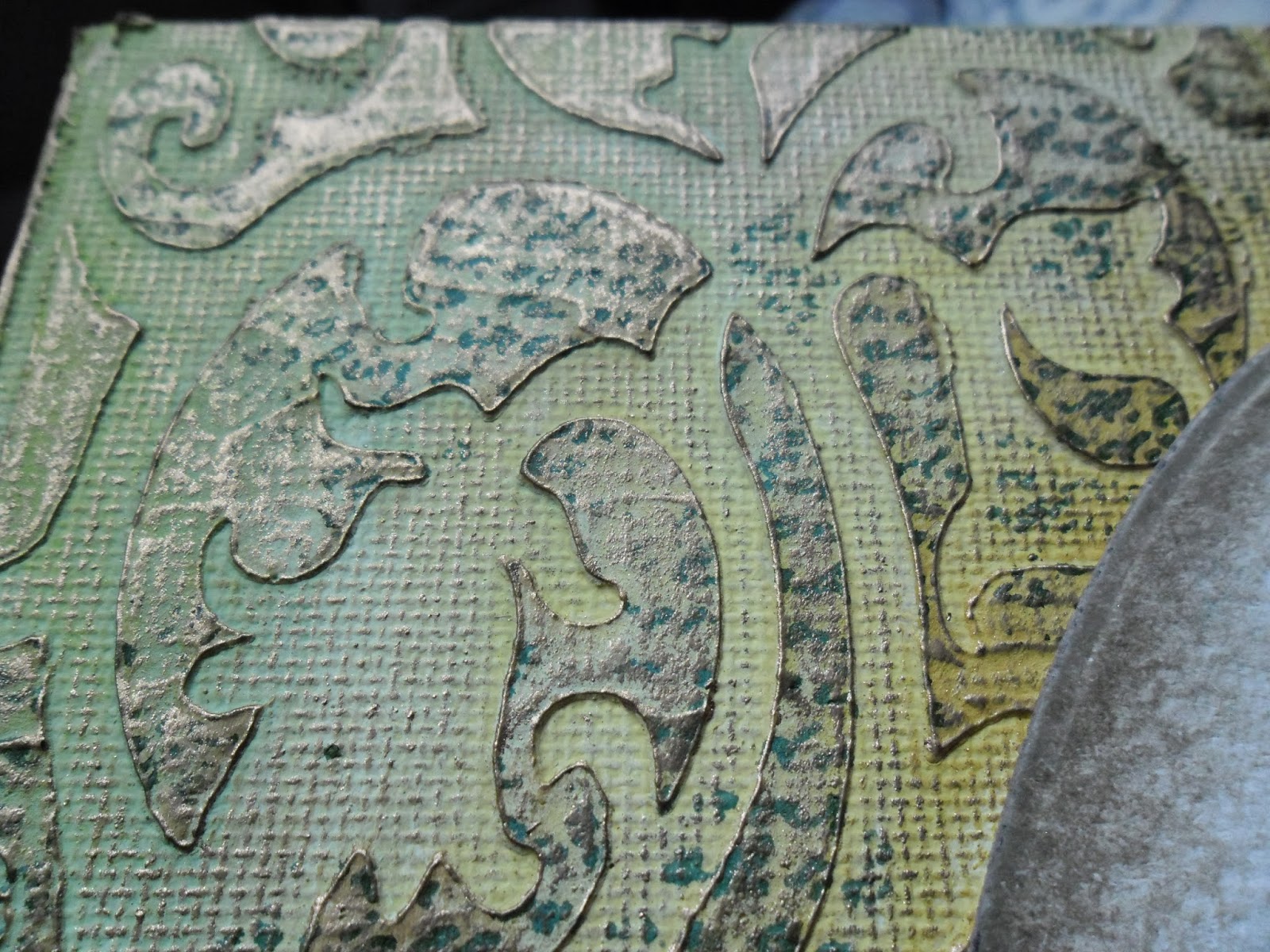 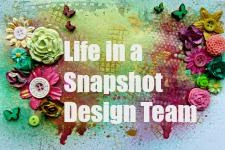 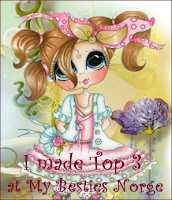